I was fortunate to draw an Arizona antelope tag this year and I opted to sign it over to my daughter Hannah.  After several scouting trips we were having a hard time finding many antelope and not any mature bucks.  When the hunt finally opened we were fortunate to find a couple of bucks that Hannah wanted to try for, but after three botched stalks things weren't looking to promising.  On Monday we were able to get on this buck as he was tending his hot doe and we waited him out until he pushed his doe up into a little draw.  We were able to sneak up to the head of the draw and Hannah made a clean heart shot at 180 yards.  It was a reminder to me that when you are running out of confidence, persistence usually pays off. 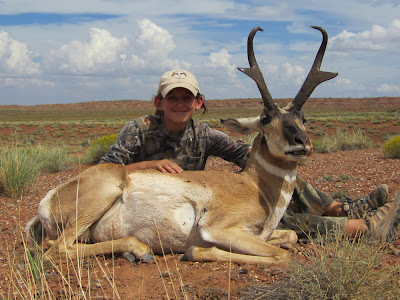